You'll find me on Github and on LinkedIn.

I recently read this fascinating thread on Twitter by the user mcc:

A long time ago— like 15 years ago— I worked at Sun Microsystems. The company was nearly dead at the time (it died a couple years later) because they didn't make anything that anyone wanted to buy anymore. So they had a lot of strange ideas about how they'd make their comeback.

I heard a lot of highups there talk at the time about "what Sun is going to be about over the next 10 years". They all seemed to have different ideas what that was. But the most common thing I heard was an idea they called "Utility Computing", that only seemed to exist within Sun

They thought in the future no one would own a "computer". Instead, your computer would exist "in the cloud" (though that word didn't exist yet). ISP NOCs would have big megacomputers, and you'd just have a screen that would connect to the nearest NOC, and it would stream to you.

So you'd have "your" computer desktop, but it wouldn't be a real computer running its own OS. It would just be a user account on some server somewhere that stored your icons and your data, and your programs would all run on the server and you'd pay a monthly bill.

Sun believed people would do this because, if people did this, it would create business for the big-iron servers Sun made at the time, & this way Sun would not go bankrupt. They didn't really have a user story. They thought users would use Solaris. Nobody used Solaris, even then.

So this never caught on as a product. But the thing is, they *built* this. It *existed*. It *worked*.

When I went to work at Sun, there were no desktop computers. Instead every desk had a "Sunblade" on it. It looked like a Nintendo Wii (though this was years before the Wii). pic.twitter.com/oAFCZsoYMM

Every Sunblade had a monitor and a keyboard plugged in, and a slot on the front, like for a credit card. Everybody who worked at Sun had a card clipped to our jeans— the same card we used to unlock the doors to the building. And we'd stick the card in. And there was our desktop. pic.twitter.com/OmwqAZZn1o

At the end of the day, you'd pull the card out and go home. And the next day you'd come back and put the card in, and there were all your programs, just like you'd left them— even if the SunRay you put your card in wasn't the same one you were using yesterday.

Because nothing ran on the SunRay, it was just streaming window instructions from a big server in the center of the building. There was even some way or other to go home and connect from your computer, and you could be running your SunRay screen at home, with just a little delay.

This was *incredible*, actually. It was *magic*. Sometimes you'd want to go to someone's office and ask for help, and if they said "well, can you show me?" you could just stick your card in their SunRay and— and instantly, there's your computer! It followed you upstairs.

Go ahead and read the whole thread. It’s an interesting read where mcc compares this system to Google Stadia - a system seemingly built without users wanting or needing it.

Eclipse Che is a modern take on this idea of having your development environment in the cloud. Everything is available through the browser.

(I previously wrote about how I use RStudio through the browser using Docker.)

When using Eclipse Che, it does not matter what sort of laptop you have. As long as the cluster that Eclipse Che is running on is capable enough, and your ten-year-old laptop is still capable of loading a website (admittedly one hard on the Javascript), you can develop like it’s 2020. Your whole application - frontend, backend, database, Redis maybe - runs in the Kubernetes cluster, and all you have to do locally is to have a browser.

You can run Eclipse Che on your machine by using Minikube, which is what we’re going to do in this blog post. I’m using Ubuntu 18.04.4 on my laptop, and I’ll take you through the instructions that I had to go through to try Eclipse Che locally. The things we need are VirtualBox, kubectl, minikube, helm, and chectl. Let’s see how to install all of those.

The first prerequisite we need is VirtualBox. Installation instructions can be found here. The last time I went through it, the instructions were:

The next thing we need is kubectl, the command-line tool used to interface with Kubernetes. You can follow the installation instructions from here. The last time I went through it, those instructions were:

The last external dependency we need to install is Helm. Installation instructions are here. The last time they were:

With all of that, we’re ready to play!

That chectl server:start-command should give you a localhost URL like http://che-che.192.168.99.101.nip.io. Open that URL, register a user, and you should end up in the Che dashboard ready to start! This is what it looks like to me: 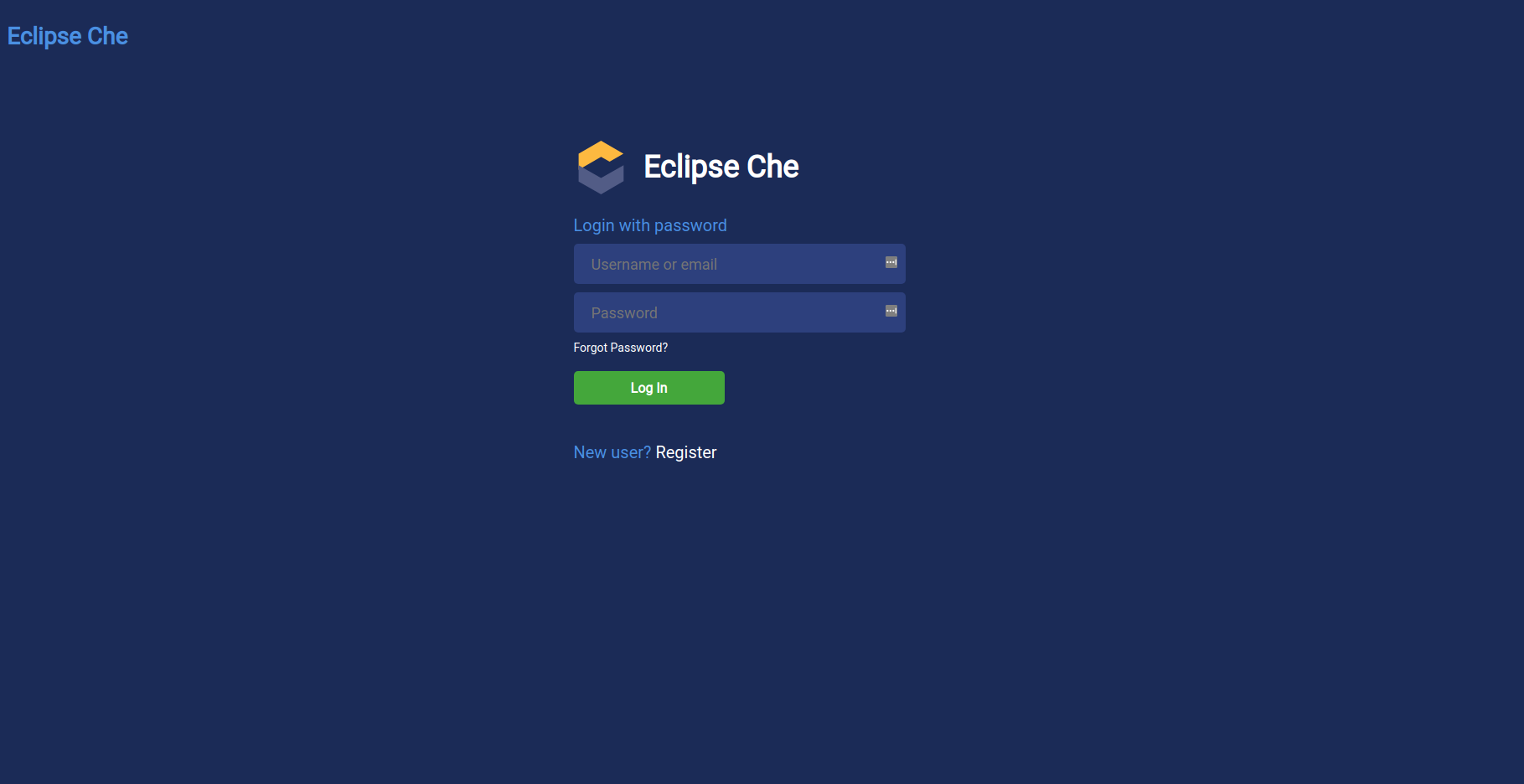 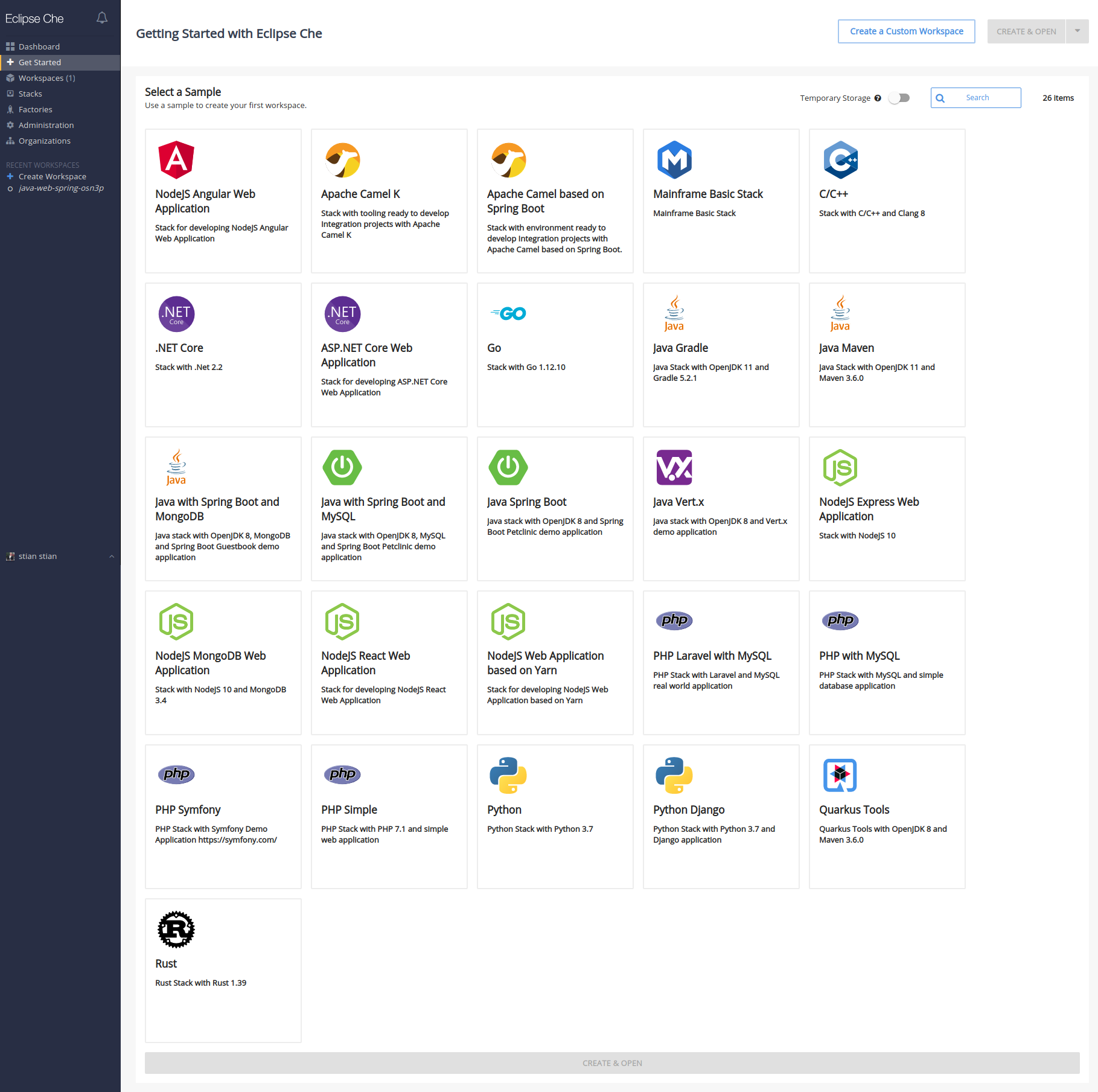 After creating a workspace, you’ll have a complete development environment. Here’s what it looks like: 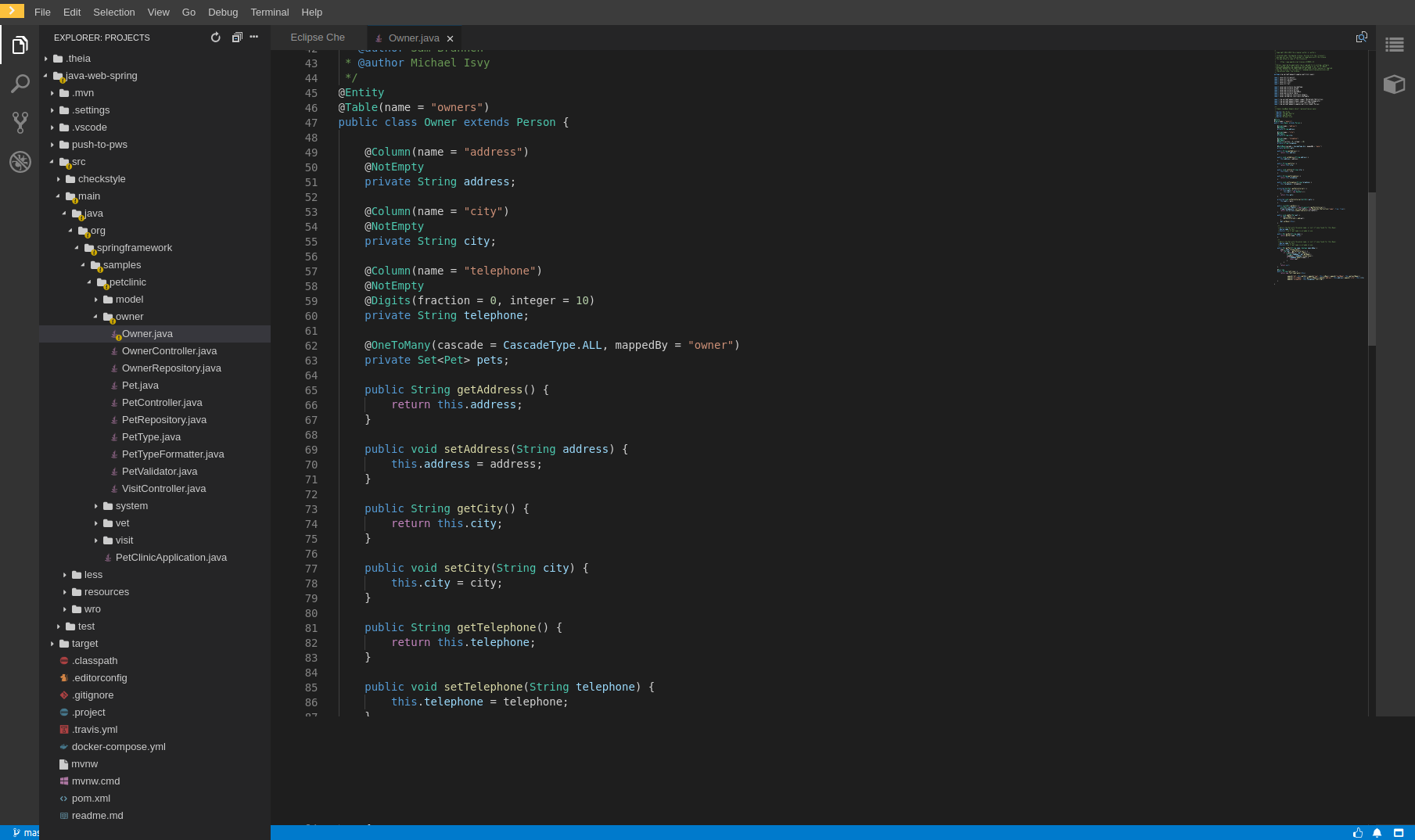 The command chectl server:stop will stop che, and the command minikube stop will take down the Kubernetes cluster.

I hope that this sparked your interest and that you want to learn more about Eclipse Che. The best source is the Eclipse Che website itself, but there are also some nice videos available on YouTube. Here’s one:

Here are the versions of the tools used in this post: